Student Admission in Junior (+2), and Degree (+3) Colleges were done in offline mode where students were required to go to every college to apply for Admission (for e.g. if a student desires to apply for five colleges he/she has to go to every college) which turned out to be an arduous task for students. Looking at the amount of effort and expenses incurred through the Offline admission process, Online (web-based) admission process was planned by Higher Education Department. This was later named as Student Academic Management System (commonly known as SAMS).

This initiative was started in 60 Junior Colleges during academic session 2009-10 and expanded to 169 junior college and 53 degree(+3) Colleges during the session 2010-11. After successful implementation of online admission during the session 2010-11 and 2011-12 under the project SAMS it has been decided to cover all junior colleges(including +2 self financed college) and 162 degree colleges (+3) during session 2011-12. After getting good feedback from college and students All junior & Degree/Autonomous students have come to SAMS Fold and it has been approved by Government of Odisha students take online admission into Junior / Higher Secondary School and degree(+3) classes of Arts, Commerce and Science streams along with Vocational & Sanskrit Educational institutions. This admission process, carried out through internet and computers is called as e-Admission. At present, SAMS covers additional courses in addition to the above i.e. it covers Correspondence, ITI, Diploma, Teacher Education, Physical Education of different departments. Besides e-Admission, SAMS also maintains the academic and financial records of each student admitted into the different educational institutions. 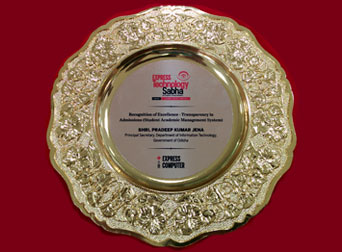 Recognition of Excellence Transparency in Admissions 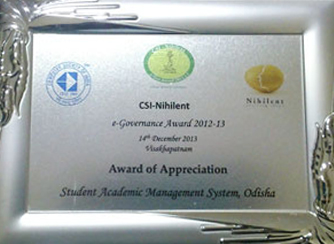 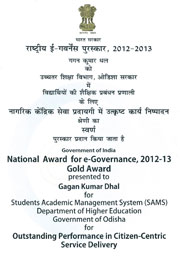